It’s been almost a 5 month hiatus since I updated this blog, I’ve been meaning to do it almost every single week since my last update but as they say “time waits for no man” and it certainly doesn’t show me any favoritism.

So, some big big updates since I last posted on this blog: What can only be described as an online diary; partly for my own entertainment and for those who are bored enough to read it or those unfortunate souls who come across it by accident.

I guess the biggest change in my life is that I moved, I moved from Diageo Brands BV and I moved from beautiful Amsterdam all the way to South East Asia on the next part of my journey. I’m sitting here typing this blog on the public transport system in my sunny new home town of Singapore.

Let me side track for a second by saying highlighting the Singapore Public transport rail system otherwise known as the MRT (Mass Rapid Transport) – try if you can to imagine being a sardine or an anchovy in a tin of the said fish you buy from the supermarket or even better imagine a packet of cigarettes, machine packaged into your little cardboard box, it’s just like that – and it’s like that pretty much every hour of every day. The Singaporeans in my new work team give me the condolences that “it’s better than Hong Kong” and maybe it is but I’m in Singapore and I f**king hate their public transport system. It’s not inefficient, slow, late or expensive – all the usual complaints us Europeans would highlight it’s just the fact it’s so busy all of the time! 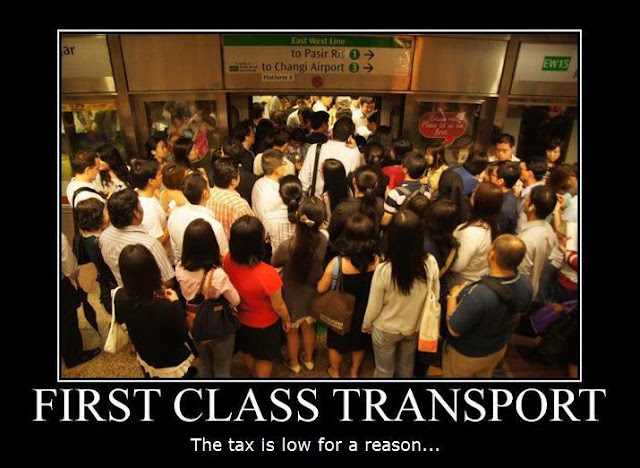 Anyway…. enough of my complaints (for now), the Big D as I like to call it in blogs to try and avoid vindicating myself from negative comments I may be inclined to make have had a reorganization or a change of operating model; whatever corporate sugar you want to sprinkle on it. They decentralized their customer operations as part of the Supply Chain from Amsterdam into the respective markets and just my luck; Asia was the first market in scope. I remember hearing rumors back in May this year that this would happen after the first reorganization of the demand side of the business in Amsterdam and on a Sunny day in June we were pulled into a meeting room and given the “bad” news. The reaction as you can expect was mixed but surprised how tolerable the reaction was from those impacted; if it had been a room full of Mackems or Geordies it would have been very different; trust me.

So not quite sure what I want to do with myself, with my career or my life I decided to apply for the new roles posted in Asia, pot luck really as I’ve made a few big mistakes in the early part of my career and surprised this was not held against me. To cut a long story short (and to remove all the BS) in the end I got the role and was the only person to move from Amsterdam over to Singapore in the first phase. It all happened very quickly and with rather lucky timing to be honest (Claudio my good Italian friend and roommate also moved over a week before me and our living accommodation had expired right on time). At the end of August, on a sunny Friday afternoon I said my goodbyes to my colleagues in Amsterdam (teary eyed as is usual practice for Jack in these types of situations) and on the 29th August I took my flight from Schipol destined for Singapore.

I landed safe and sound on the sun scorched pavements of Singapore (my first time in Asia actually – quite brave / stupid – feel free to decide) happy to see some of the colonialist actions carried out by the British were still evident (driving on the correct side of the road was the first one I have to mention). I pretty much hit the ground running and started working the day after I arrived. The Big D had arranged for a rather nice studio apartment for me on the 27th floor of a building close to work at a cost of 7,000 SGD (3,500 GBP) per month which I was very glad I didn’t have to pay – especially considering the place was 30m2 if that but my God It had one hell of a view..

The first month passed extremely quickly and of course; good things never last; the apartment rented for me was only for a month and post this month of holiday feeling I had to find myself a place to stay; obviously in true Jack style I left everything to the last minute and before I knew it found myself homeless in South East Asia. It was this point where I had to rely on the Italian, the tricolore, one of the nicest guys and epic friends any guy would be lucky to have. Claudio put me up for a week in his place him and his girlfriend were living in…unfortunately I had to play Gooseberry for a week but hey beggers’ can’t be choosers can they?
During this period I was frantically searching for permanent residency, partly to held out Claudio as I didn’t want to impose on him and his girl any longer but mainly for my state of mind. I guess I follow the Maslow hierarchy more than I ever though and I need a permanent place of residence, somewhere to put my books and hang my coat in order to function properly. During this period of uncertainty I just wasn’t myself at work and was feeling pretty down in the dumps.
I eventually found an epic place; what they call a Condo Apartment here in Singapore, it’s basically shared accommodation in a semi-up market style (i.e. non Government buildings or HDB’s they call them here). It was in a place called Kembangang and had an infinity pool on the roof, a Jacuzzi and a BBQ pit for pleasure. The room was only 550 GBP per month and considering Id been paying 100 quid more a month back in the shitty place I was living in Amsterdam this made a fresh and delightful change.

Unfortunately I lost out to a pair of boobs; trying not to be sexist here for the possibility of a wider audience but it was a single French guy renting out the place and If I was in his shoes I’d probably have done the same thing. Anyway two good things came out of this viewing; one I met a really cool Filipino guy (the guy who was leaving the apartment) called Oryx who has one of the most beautiful English accents I’ve heard for a non native, almost poetic with a twist of South African. The second good thing to come out of this was the fact that he recommended me to his two friends who were looking for a new roommate and alas this is the place I stay now, in other words it was because of this chance meeting that I’m now living in an epic condominium in a place called Paya Lebar (which means White Swamp in Malay), so if you’re reading this Oryx; thanks a million!


I’ve now been living in this Condo for a couple of months now and I have to say I probably wouldn’t still be here in Singapore or at the Big D for that fact if it wasn’t for Oryx and this new place. I live with two American guys, well when I say American it’s in the most general tone possible – both have American accents but in reality one of them is Mexican (Enrique) and the other a French Canadian (Nico) both of whom are working for 3D Effects companies making and rendering special effects and animation for movies, video games, TV etc. One of those really cool jobs we would all love to do if we’d studied hard enough at school or had the dedication to go for.

Ok so that’s it for now; we have an up and coming positively gonna be epic BBQ this Saturday (3rd December 2011) at the BBQ Pits in the Condo with about 40 – 50 people coming. It’s going to be a mash up. Will keep you updated ;) oh and another thing – I must try and post more often to minimize the length of these posts – no one likes reading an essay right?