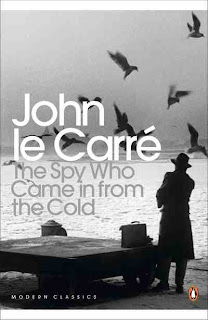 About a year ago now I started reading a book by John le Carré that I picked up absolutely randomly at the bookshop in the airport before flying back to England during my time in The Netherlands. It was called "A Most Wanted Man" and was a Spy / Espionage / Terrorist themed book with a fantastic story line and an abrupt non-satisfying ending...which funnily enough I seem to enjoy. A Most Wanted Man was the follow up to the critically acclaimed "Constant Gardener" which I have not yet read..After finishing the book I was again catching an Amsterdam->Newcastle flight and picked up two more le Carré titles for £10. One book called "The Mission Song" and another called "The Spy Who Came in from the Cold".
Let me start by saying this book is possibly one of the greatest books I've read in my life. It gripped me from start to finish; I found myself unable to put the book down, powering through the streets of Amsterdam with the book in my hand; navigating society on autopilot as I was so engrossed in the story and so attached to the characters I just couldn't put it down... A high period of high pressure and stress at work turned the pace of progress on the book back down to low but I've just finished it today; the last few pages keeping me trapped on the spot in the middle of the street, unable to go anywhere until I had finished.
The book is based somewhere in the 60's, in post-WW2 Britain where espionage and spying is still top priority for the governments of Europe. The book follows Alec Leamus, a 50-something year old veteran spy brought back to England after a string of failures in Berlin, on the verge of retirement finds himself with one last mission; probably his most dangerous and high priority mission in his career. Along the way Alex hits a string of unfortunate incidents but finds a flower amongst a graveyard when he meets a young librarian girl called Liz. The story comes together in a big high tensity ultimatum in true le Carré style.

John Le Carré; a former intelligence officer himself working for both MI5 and MI6 sections of British Secret Service which enables him to make this particular story so en-capturing. Le Carré also admits in an epilogue to the book that during the time of writing the book he was in a very dark place within his life and he believes some of these experiences he experienced formed parts of the main character Alec Leamus and you can feel it as you turn the pages.

I don't want to spoil the book for anyone who may be interested so I'm going to wrap up here. If you like James bond style spy, espionage and high tension thriller book's I'm sure you will enjoy this tremendously.